The week began with two workshops on Monday Jan. 25th. These focused on Empirical Statistical Downscaling (ESD) and Land Use/Cover (LUC), respectively. One of these resulted in an agreement to more closely and explicitly integrate ESD and Climate Information Distillation as core EURO-CORDEX activities, in addition to dynamical downscaling. The LUC workshop lead directly to an initiative to submit a community-wide FPS focused on such issues. 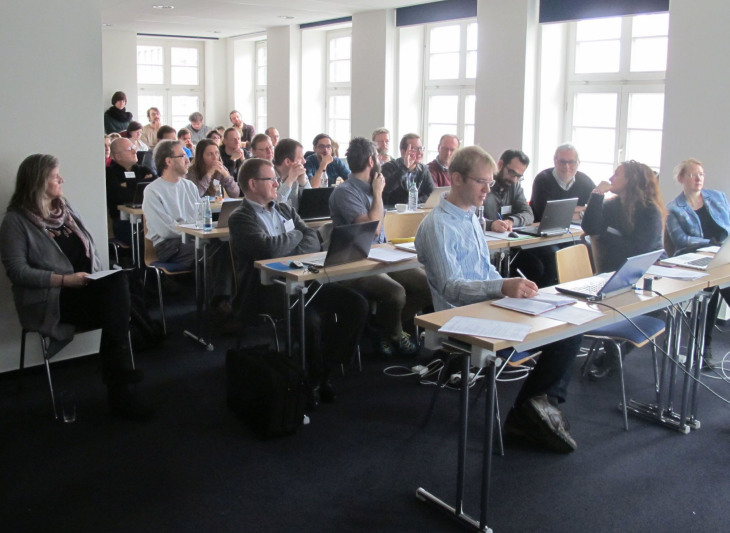 The community also spent some time brainstorming key research themes.
These discussions resulted in an extensive and exciting list of research ideas
that relate back to both the mini-challenges identified by the CORDEXScientific
Advisory Team (SAT) and, more generally, to the Grand Challenges
put forth by the WCRP.

In addition to confirming the community’s’ commitment to fill up the existing
experiment matrices they also discussed the feasibility of additional
simulations and variety of potential Flagship Pilot Studies. It was decided that
the EURO-CORDEX community will submit two FPS applications one of
which will be in collaboration with Med-CORDEX. In order to organize the work of EURO-CORDEX, three working groups have been established: dynamical downscaling; empirical statistical downscaling and climate information distillation.

For further information about the meeting or the community-wide FPS applications contact EURO-CORDEX points of contact Daniela Jacob, Eleni Katragkou, Stefan Sobolowski or refer to the EURO-CORDEX website (www.euro-cordex.net).